skip to main | skip to sidebar

Ok, it has been long enough I guess I should make this post. As the title says, it will be on my second trip to Seattle this year. We did make the obligatory stops at El Tapatio and Rice Hill both on the way up and on the way down, however this one will be more about a couple of other things I/we did on this trip.
Let me start by saying that I love waterfalls. One of my favorites is Multnomah Falls about 30 miles east of Portland Oregon. They have a path that climbs from the base to the top that is about a mile long, and goes up about 150' higher than the 620' water fall, then drops back down to the top of the falls. I have climbed it twice before, the first time it took me more than 2 hours to get to the top and then come back down. The second time it took me about an hour and a half to do the same, that time my sister Theresa climbed it with me. This time I wanted to see how quickly I could do it after several months of boot camp 3 days a week. We added a day to the trip so I would have time to make the climb. So on Friday of the trip we got up and got ready and set off to make the climb. My mom and dad set off with me but we all went at different speeds. I made it in 29 minutes 55 seconds and was very happy with my time. It was nice to be the one passing people and encouraging them instead of being the one getting passed. After being up there about 25 minutes I called my dad to see where he was, and he had just crested the top, and was on his way down. I went back and walked the rest of the way down with him, took some pics and went back down. Ok, I don't remember where I was going with this post, but to make a long story short we also stopped in Portland on the way back so I could climb it again on Sunday, and it took 27 minutes plus then. I do have pictures, but will not be posting them at this time.
Posted by Trevor at 11:27 No comments:

Ok, I guess now that it is more than 4 months later I will make my next post. I will start off with a brief bit about the January trip and then finish with the May trip. Afognak, one of the native corporations I have shares in, had a shareholder outreach meeting. I went up with my mom and dad. We have a few regular stops, the first is at a Mexican restaurant in Ashland Oregon. It used to be in an old mobile home, but when we went to the old location it was closed. Luckily as we were leaving I saw a sign that said something about having moved. We followed the directions, and after only a couple of missed turns we found the new place. Here are a few pics of our stop there on the way up. 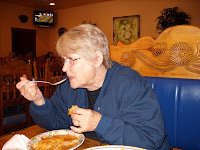 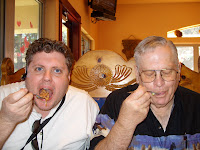 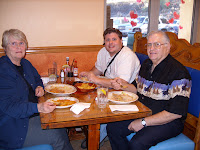 We took these pictures because my sister was supposed to join us, and since she wasn't there we said we would take a bite for her, and these were her bites. The second stop is in Rice Hill Oregon for ice cream. They have some of the best ice cream I have ever had. Then on Saturday we went to the meeting and started home. We made it as far back as Salem Oregon and stayed the night there. The return trip always includes the same 2 stops and this is a picture of me with a small ice cream from the drive in in Rice Hill. 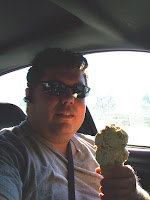 I think I will end this post here, and put in another one with the May trip, I will post it in the morning, it is more involved.